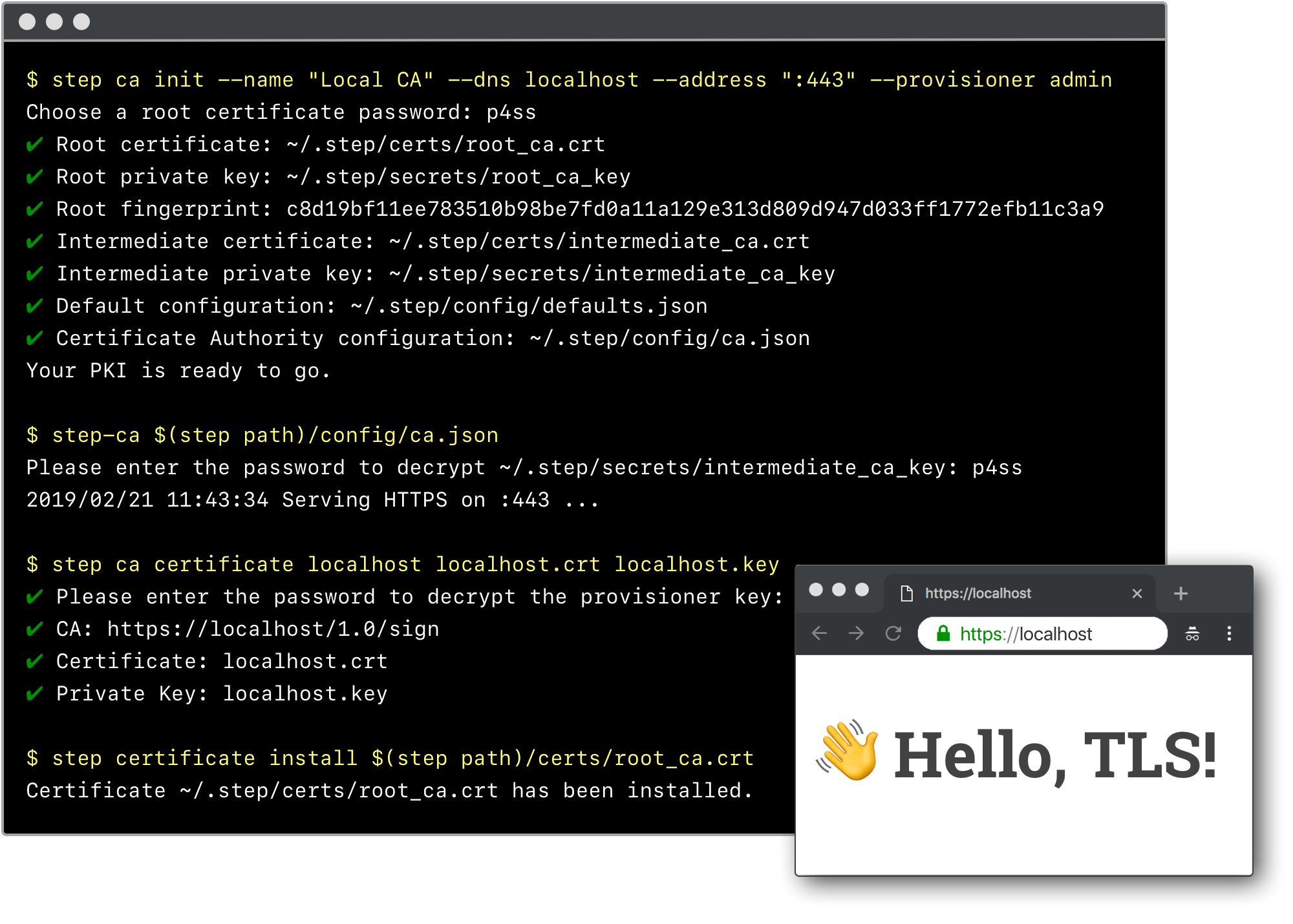 Zero trust is the idea that perimeter-based security using VPNs & VPCs is broken and should be replaced with identity-based security using cryptography (e.g., TLS). This is unequivocally a good idea. Partly because it’s “better security” but mostly because it works everywhere: you can connect on-prem to cloud, AWS to GCP, serverless to containers, IoT to edge… x to y for any x and y. It’s universal: based on math, not trust in some vendor’s platform-specific solution.

To follow along at home (which I highly encourage) you’ll need to install step. We’re happy to announce that step is now in homebrew core. To install on macOS simply run:

If you use docker you can launch our base image locally:

Or in a kubernetes cluster:

Historically, obtaining TLS (HTTPS) certificates has been annoying and expensive. Let’s Encrypt solved that problem by allowing anyone to obtain a free certificate automatically using the ACME protocol. It’s a fantastic service. You should be using it (or something similar) for your public websites and APIs.

But certificates from Let’s Encrypt and other “Web PKI” certificate authorities (CAs) are no good for service-to-service communication or anything else you want to keep private and internal. They’re rate limited, can’t issue certificates for internal names (e.g., localhost or foo.default.svc.cluster.local), and the ecosystem suffers from some serious trust issues.

We built step certificates to make running your own CA and managing certificates for internal services as easy as Let’s Encrypt.

You’ll be prompted for a password to encrypt key material.

Next, start your CA using the generated configuration (you’ll be prompted for your sudo password so we can listen on port 443, then your step admin password):

You can get a certificate from your CA for any name, including localhost. In another terminal run (you’ll be prompted for your step admin password):

If you’d rather not run an online CA try the lower levelstep certificatecommand group.

Internal services can be easily configured to trust your CA. That means they can securely communicate across the public internet using mutual TLS without a VPN. Huzzah!

We built step certificates to manage certificates for production workloads. But we’ve received several inquiries about a slightly different use case: simulating Web PKI so TLS works as expected in development and pre-production environments. In other words, people want dev & pre-prod certificates that work by default in browsers just like their production certificates from Let’s Encrypt.

That all seemed pretty reasonable to us, and we’d already built most of what was required. There were just a few small gaps to fill to make it easy. Today’s release adds a powerful new command to fill one of them:

Inspired by Filippo Valsorda’s mkcert utility, step certificate install makes it easy to trust a new CA locally. After installation, certificates issued by that CA will work in browsers and elsewhere, just like a certificate from Let’s Encrypt.

You’ll get that elusive lock icon with your own locally issued certs:

We’re very grateful for Filippo’s awesome work with mkcert. His code for working with root trust stores on various platforms made this feature much easier to build. We factored that code out into a separate golang library to make it even easier for others.

Like mkcert, step strives for simplicity and does the right thing by default. And, like mkcert, we’re working on adding ACME support to our online CA to make local development using TLS a simple matter of switching your ACME endpoint URL.

Unlike mkcert, step aims to be comprehensive and useful from development through to production. If you just want locally issued certificates for development, you should use mkcert. If you also want CA infrastructure for your microservices in pre-production and production, you want more control over the keys and certificates being generated, or you want an easier way to install your existing enterprise certificates on endpoints, you should check outstep certificates.

And if step doesn’t do something you want it to do, please let us know!

What else is new?

Web servers often respond to multiple names (e.g., amazon.com and www.amazon.com). To support this you can bind multiple subject alternative names (SANs) in a certificate. The new --san flag lets you do so using step:

The public key bound in a certificate can be used to verify a signature or encrypt data for the certificate’s owner. To do so the key must be extracted, which can be a bit tricky. So we added the step certificate key command:

Certificate fingerprints are really useful for debugging. This release adds the ability to fingerprint a remote server’s certificate to verify that the correct certificate is in use:

If you’ve been following along with the examples here you might want to remove the certificate you installed earlier. There’s a command for that, too:

When you run step ca init it generates artifacts that are stored in ~/.step. To remove step from your system simply remove that directory. To use a different directory set the STEPPATH environment variable.

Stay tuned by following us on twitter and GitHub!